London Play has supported a successful resident-led campaign to overturn a decision by Croydon Council to introduce charges for children playing in the street. 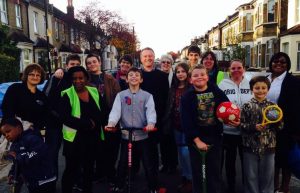 Resident Sue Ahmad was “shocked and angered” when she was told that there would be a charge of £234 to renew the licence for a play street that has been running in Thornton Heath since 2018. Her street, Livingstone Road is closed to through traffic for three hours on every second Sunday of the month Between March and October,

“The decision to introduce this charge seems very short-sighted, particularly now; when communities have suffered through more than a year of isolation and separation.”

The council confirmed on June 4 that a £234 charge would be levied to pay the costs of advertising the road closure, despite it not being a legal requirement.

In a letter to Cabinet Member for Sustainable Croydon Cllr Muhammad Ali, London Play deputy director Fiona Sutherland wrote: “The decision to introduce this charge seems very short-sighted, particularly now; when communities have suffered through more than a year of isolation and separation, accompanied by a marked decline in the mental and physical health of both children and adults.  Play streets are a cheap and easy resident-led initiative which mitigate exactly these negative impacts. Now more than ever, they should be encouraged.”

A petition challenging the council organised by play street organiser Siobhain O’Hanlon attracted 600 signatures and then yesterday Cllr Ali confirmed on Twitter that Croydon Council “has always supported play street events and will continue to support anyone who wants to organise a play street without any charges.” Officers at the council confirmed there would be no charge and that the earlier notices had been sent ‘in error’.

Parents are worried that the loss of freedom to play during the pandemic could have a long term impact on their children.
Read More
London Play in the news

London Play calls for a 'summer of play'

London Play has joined academics and other play campaigners in calling on the government to support 'a summer of play' to help children recover from the stress of lockdown and a year of Covid upheaval.
Read More