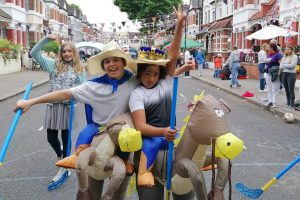 TOWER HAMLETS: A new play street could be in the making following a successful Jubilee street party in Rigdale Road. The borough of Tower Hamlets is a late-comer to play streets, having only recently adopted a policy to allow residents to open their streets regularly for play. London Play is working in the borough this year to make sure residents are aware that this is now a possibility, and support them to apply to become trail blazer play streets for the borough.

A Jubilee competition run by London Play invited those planning street parties to enter a PLAY-tinum prize draw and win a ‘polo’ set to bring some regally-flavoured playfulness to their day. Rigdale Road was the winning street and the sight of be-crowned children galloping on inflatable horses, brandishing hockey sticks and with velvet cloaks flowing behind them delighted young and old alike.

It was such a lovely surprise to win the London Play Street competition for play equipment for our Jubilee Street Party. The street hockey – adapted by the London play team to be Royal polo! – was a real hit. It gave the children a fun and energetic game to let off steam and great time was had by all.

The organising committee for the street party was really interested to learn about play streets and is keen to work with London Play to explore the possibilities. The organiser added:

Having the opportunity for neighbours to socialise while the children play safely in the street would be fantastic. Hopefully the initiative can be well received across the streets, estate blocks and parks throughout the borough.

Tower Hamlets is one of four boroughs being targeted for support in the final year of London Play’s Playful Communities project.  Islington, Hammersmith and Fulham and Lambeth are the other three boroughs, where residents who are interested in starting a play street will get one to one support and free play street kits.

Playful Communities is a four year project supported by The National Lottery Community Fund. It concludes at the end of October 2022.

Tower Hamlets' Mayor John Biggs has spoken out about how vital play is for children as we emerge from the worst of the pandemic, as a new playground at Millwall Park opens.
Read More