The harm caused to children by keeping adventure playgrounds closed is now beginning to outweigh the risks of opening them, says a leading expert in health and safety. 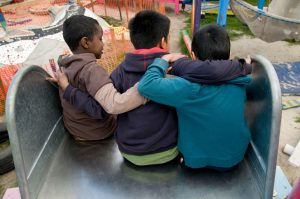 British Safety Council chairman Lawrence Waterman OBE has added his voice to those of paediatricians, mental health professionals, educators and parents who are calling for the government to prioritise children’s needs and announce a plan to open playgrounds.

“For most children, the harm done by delaying the experience of adventurous play is beginning to outweigh the risks that arise when they share a playground.”

In an expansive statement, Mr Waterman says that: “It is wholly appropriate to prepare now to reopen those playgrounds closed as part of the general lockdown nearly three months ago.  There are risks from the virus that need to be discussed, understood and mitigated – just as there are with the physical play itself – but we know that young children are much less likely to be made seriously ill, and much less likely to infect others.  Now that the peak of the infection is behind us, it is time to explore how we can reopen facilities that are important in our children’s development.”

He acknowledges that some children who are themselves very vulnerable because of their health status, or who live in households with family members who are vulnerable, may be the exception. But, he says, “for most other children, the harm done by delaying the educational experience of adventurous play is beginning to outweigh the risks that arise when they share a playground.”