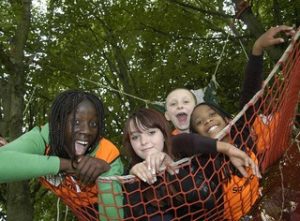 The children of Islington know that their 12 adventure playgrounds will not only always be there for them to play in, but also for their children and grandchildren – and so on in perpetuity. The funding to support them is also assured until at least 2015. So while elsewhere in London people were threatening to chain themselves to the railings to protect their beloved playgrounds from demolition – how did Islington go about successfully securing a future for play?

Islington is known for its commitment to play – indeed the need to preserve and promote play opportunities in a borough which has the second least amount of open space per person in the country is particularly acute. Redressing the balance, the borough boasts more adventure playgrounds per head of population than any other London borough apart from Lambeth. Of its 12 adventure playgrounds, six are run by voluntary groups and the other six by the council. It also boasts a strong play association in the form of Islington Play.

Early in 2011, the council recognised that in order to maintain its commitment to play in the face of significant budgetary pressures, it would need to take a more strategic approach to providing its adventure playgrounds. An adventure play review project board was convened in April 2011 to support the development of a sustainable future plan. Indicative of the high level, cross-cutting nature of support for play across the borough, the board included representatives from both council and voluntary run playgrounds, public health, large voluntary organisations in the borough and various strategic leads from within the council including those with expertise in property and finance.

The group met eleven times over the space of a year to consider a huge amount of material and evidence gathered during the review period, including through data profiling, research and consultations. Play strategy and inclusion development manager Christine Lehmann explains: “Through this we were able to establish, for example, that some of the most vulnerable children in Islington were proportionally over-represented among those who attend the playgrounds.” It was this sort of evidence which helped persuade the council that revenue funding should be maintained at current levels, she says. It also agreed to stick to the principle of providing adventure play which is free for children at the point of access…

New primary school assessment processes introduced in 2016 risked narrowing of the curriculum and ‘teaching to the test’, as well as affecting teacher and pupil wellbeing negatively..
Read More
Children and young people

This report, by the Child Poverty Action Group and the Joseph Rowntree Foundation looks at what  families need to provide a minimum socially acceptable standard of living for their children.
Read More