Dukes Meadows: a model of sustainability 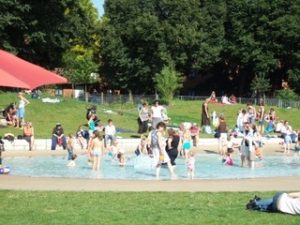 Capital investment in play facilities reached a peak during 2008-2010 with Playbuilder or Play pathfinder funding; or money from the Big Lottery Fund’s Playful Ideas strand.  Not all gave much thought to how the inspiring new playgrounds resulting would be sustained. But in Dukes Meadows, that was part of the project from the start.

What is now the Dukes Meadows Trust had been an active friends group for many years when in 2008 it was awarded £250,000 from the Big Lottery Fund’s Playful Ideas strand to rebuild a derelict play area. The group was already experienced in dealing with such endeavours; in 2006 having delivered a new paddling pool with a central fountain, a sandpit and a refreshment kiosk, within landscaped surroundings aimed at 2-8 year olds and their families.

The brief for the new play area, for children aged 8-15, was informed by pupils from local schools. Their wishlist included high slides and bridges, trees to climb, hiding places, dens, places to jump and practise balancing skills, stepping stones, boulders. The result is a challenging and inspiring play space which embraces the park’s natural features including a dry riverbed creating a flexible play area that changes over seasons. The new playground opened to great fanfare in March 2010 – but its physical transformation is only one part of the story.

Kathleen Healy, a DMT founder member, lives on an estate beside the park. A qualified banker, she understood the need to create assets: things that would generate income, as well as raising funds for capital improvements. “The playgrounds are hugely valuable and something we are proud to have created,” she says. “But recognising that they are, in a financial sense, liabilities was key to understanding the need to create enterprises to generate revenue to pay for their maintenance and replacement over time.”

This philosophy has guided the group almost from its inception. In 2000 it established a Farmers Market, which runs weekly and now grosses over £20,000 per annum in rent from stallholders. These funds contributed to the restoration of a semi-derelict pavilion, which has been converted into 14 rentable artists’ studios which provide DMT with a yearly income of £80,000.These funds not only help pay for maintenance and repair of the play areas, but also nature study classes for children from the estates, free family activities in the summer, and help employ a ranger to recruit and involve volunteers and continue to engage the community.

Hounslow council agreed to grant DMT a 25-year lease on the play areas once funding was secured. DMT shares responsibility for maintenance of the adventure play area with the council, but is solely responsible for maintaining the water play area.  This was made affordable by a smart lease on the kiosk beside it, built as part of the project. Its operators are trained and responsible for checking and maintaining the water quality in the pool and the pool plant – saving the cost of employing an attendant, which would have made the facility unviable.

Kathleen explains that connecting various strands of the local community to work together makes the project sustainable. “The leadership from young people and of the community was a key factor. It promoted local ownership of it and reduced problems of vandalism. The involvement of the Croft Centre helped ensure that the play area meets the needs of children of different abilities. Now children come to Duke Meadows to meet and play together, fostering greater understanding and acceptance. Some children involved with the playground now work in the Farmers Market.”

Increasing physical activity among children is a potentially important public health intervention. Quantifying the economic and health effects of the intervention would help decision makers understand its impact and priority. This report suggests that if 50 percent of children in the US exercised for 25 mins daily, $8.1 billion in direct medical costs and $13.8
Read More
Children and young people

The annual report from the Children's Society finds that 15-year olds in the UK are among the saddest and least satisfied with their lives in Europe.
Read More