Play was an early casualty of the coronavirus pandemic. Children’s lives were stopped in their tracks: schools and playgrounds closed, families were confined to their homes and social interaction all but ceased.  London Play swung into action. 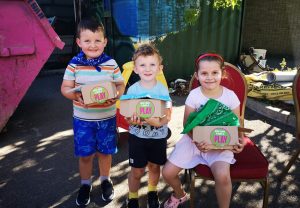 Although the explosion in food poverty is a widely-recognised consequence of the coronavirus pandemic; play deprivation is the less visible tragedy for the capital’s 1.8m children.  For the 37 per cent of children already living in poverty, or the 22 per cent living in overcrowded homes, the deprivation is even more acute.

London Play’s Emergency Play Parcels were put together at warp speed to alleviate the suffering of children who had been denied the simple opportunity of playing with their friends.

The parcels included a unique deck of 52 playing cards produced by the team at London Play, each describing a game or activity to be played at home or even over the phone with relatives or friends. Small and simple props to support the games they describe, such as chalk, balloons, drawing materials and minifigures, are included in the box.

Thanks to two rounds of funding from The National Lottery Community Fund (TNLCF) Covid-19 Response Fund,  some 4,000 parcels were distributed in two swathes (in July and December 2020) to families most in need via adventure playgrounds and food banks. Most of the capital’s 80 unique adventure playgrounds are located in lower income neighbourhoods where children are most likely to be suffering the worst impacts of the pandemic. These safe, staffed community hubs had been forced to close their gates for play, but many rose to the challenge presented by the pandemic and began distributing food and more for people in need.

It's time to put children first

Children are the invisible victims of the coronavirus pandemic. As lockdown eases, it is time to prioritise their right to play.
Read More
Current work

2021: The Play Street Carousel is a unique project that harnesses the power of play to strengthen bonds between neighbours, even as the pandemic keeps us all apart.
Read More
London Play Press Releases

With residential camps on hold for now, Camp Build has gone on tour to bring the unique building adventure to playgrounds across the capital.
Read More