In each of the three years, Camp Build was to host three ‘build in the wild’ weekend camps for 11-15-year olds who like building stuff (go-karts, tree-houses, ramps etc.), or wanted to learn how. 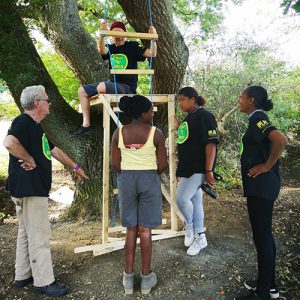 Groups were to be chosen from London adventure playgrounds, many located the capital’s least affluent neighbourhoods.

The camps aimed to give young people skills that they could use when they returned to their playgrounds, to help with the upkeep and development of the site. Each camp catered for up to 20 young people and funded two playworkers from each playground to accompany their group.

In 2019 three camps were held in May, June and September at Debden House Campsite on the edge of Epping Forest. Participating groups came from Bethwin and Triangle Adventure Playgrounds in Lambeth; Three Acres and Talacre playgrounds in Camden; and Somerford Grove and Pearson Street Adventure Playgrounds in Haringey and Hackney. Creations included a treehouse, banquet table, go karts and even some five star accommodation for rabbits. You can read the end of year report to find out more.

In 2020… well, we all know what happened in 2020! Coronavirus put a stop to camping in Epping Forest but London Play was determined that children (who had already suffered so much during lockdown) would not miss out. Camp Build on Tour took materials, support crew and plenty of joie de vivre to adventure playgrounds and worked directly with children in their ‘bubbles’ to build extra outdoor shelters and playground improvements on sites where all the action was happening outdoors.

Finally in 2021 the triumphant return to Epping Forest. The week-long finale extravaganza saw three adventure playground groups hailing from Merton’s Acacia, Camden’s Three Acres and Newham’s Arc in the Park coming together to build structures, friendships and memories under the sun and stars.

Check out the Camp Build promotional film below:

We are grateful for the additional support provided by the following funders, which enabled us to open the Camp Build opportunity to more children:

With residential camps on hold for now, Camp Build has gone on tour to bring the unique building adventure to playgrounds across the capital.
Read More
Adventure play

OK, so WE KNOW that adventure playgrounds are worth their weight in gold. Our Play Works project (2015-20) supported play workers to make sure they had the evidence to convince potential funders of the same.
Read More
Current work

2021: The Play Street Carousel is a unique project that harnesses the power of play to strengthen bonds between neighbours, even as the pandemic keeps us all apart.
Read More